Written by Movement Athlete
Updated over a week ago

The workouts are built up of several movements/exercises which can be categorized into:

Each one of these categories is there to train and improve a specific aspect of calisthenics.
Here is an example of the journey programmed for Pistol Squat. 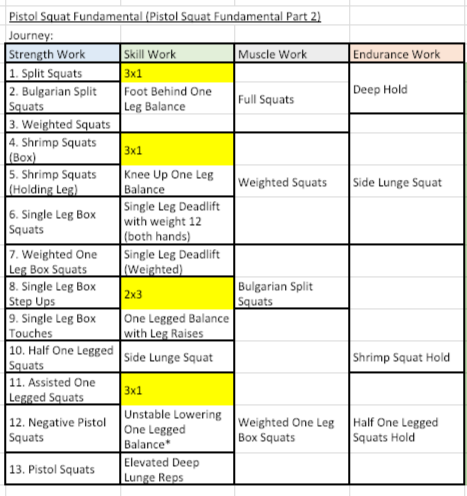 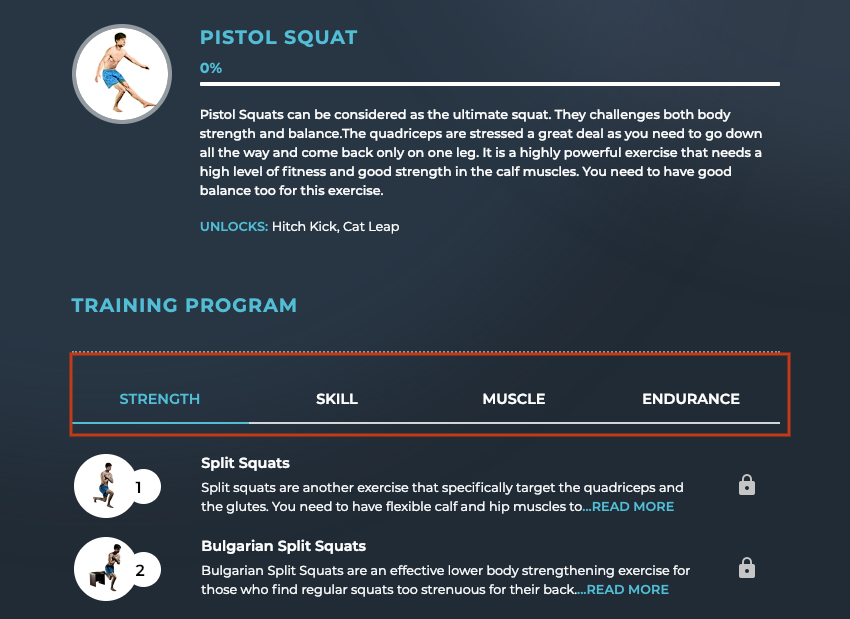 Our workouts are build around a specific skill. So if you have a Pistol Squat today in your workout it will pull out automatically movements for Skill, Strength, Muscle and Endurance.
Because of that you might see different versions of squat for example but programmed specifically either for strength or endurance in one workout.
After training our athletes we found it to be the most effective way for them to progress.

STRENGTH WORK
Strength movements or main movements are the reason we are here. These are the movements that will chart your progression through the world of calisthenics and bodyweight fitness. There is a large variation in strength movements, from easy to hard, low volume to medium/higher volume, dynamic to static.

MUSCLE WORK
A bigger muscle has the potential to become a stronger muscle. Muscle movements are movements which are done at low-to-medium intensities and higher total volumes for the purpose of building muscle. The lower intensities also allow athletes to focus on the muscles involved and to get a good squeeze and pump. Many muscle movements are pulled from appropriate strength movements.

ENDURANCE WORK
Many calisthenics movements involve static holds. Endurance movements train the athletes capability to hold the body various positions. These are typically programmed to be easier than the equivalent strength movement holds. Instead, more work volume is added for more practice time.

Taken together, these different movement types are designed to produce skilled, strong and complete bodyweight athletes.

The way workouts are programmed is around a specific skill. So if today you are working on muscle ups - the program will pull skill, strength, muscle and endurance exercises from muscle up based on where are you at in the progression and create a workout based on that.

Why do it that way?

In an ideal situation (abundant time, energy, equipment), it can be beneficial to separate training goals or the systems being trained. For example, you would have a heavy strength workout on one day or at one time of day, then have a speed and agility workout on another day or at another time of day. Professional athletes often train like this, often with multiple sessions a day, six days a week. This allows the athlete and the athlete's body to focus on the type of training of that session and to reduce interference from training several aspects of fitness concurrently.

The Movement Athlete does include workouts that focus on different aspects. However, due to various reasons, many of the typical workouts will train skill, strength, muscle development, endurance and flexibility in the same workout. This is because:

- Many of the users of The Movement Athlete are at the beginner to early intermediate level. At this stage, there is not much need for specialised and separated training. Just putting in quality effort, sticking to a good workout schedule and working through the TMA progressions will give you good gains. The more advanced a user becomes and the more often a user can train, the more likely the user will be given specialised workouts.

- The less often a user can train, the less likely it is that the workouts can be organised according to type or goal. For one to four workouts a week, it's a better use of time to train as many movements and movement types as possible. We would also prefer that the user trains the movements and the various aspects of fitness more frequently, especially through the beginner and intermediate phases.

WHAT ABOUT BASELINE ASSESSMENTS THAT YOU DO?
In TMA we also perform baseline assessments - these are done differently for Strength and Endurance and you can read about them here

Did this answer your question?